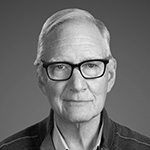 Tom Peters co-authored the book “In Search of Excellence” translated into French as “The Award of Excellence”, which revolutionized the business world and is often referred to as the best book in history in the category “business”.

18 bookss and 35 years later, Tom Peters is still at the forefront of the world of “management gurus”, which he invented.

So what’s up ? Many things. As CNN said, “ while most business gurus exploit the same mantra to the last drop, the Tom Peters brand continues to reinvent itself “. His latest book is entitled “ The Excellence Dividend: Meeting the Tech Tide with Work That Wows and Jobs That Last ” (Vintage, 2018). His fundamental belief is: “ Execution is strategy – it’s all about people and actions, not about words and theories. ”

In November 2017, Tom Peters received the Thinkers50 Lifetime Achievement Award, recognizing his entire career. He has given more than 3,000 conferences in more than 60 countries on excellence in business and leadership.

We use cookies to ensure that we give you the best experience on our website. If you continue to use this site we will assume that you are happy with it.OkLearn more